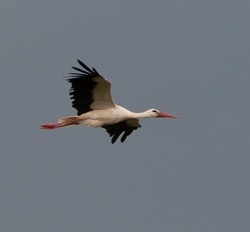 Storks in Latvia (by Manfred Anders)
Stork - this large, noble bird is considered sacred by Latvians as by many other nationalities. Many beliefs are associated with storks; for example, the house where a stork lives has good fortune; a stork protects the home from fire; a stork brings happiness and prosperity to a household as well as babies. Storks and babies have been linked together for centuries. That is perhaps because storks have a habit of nesting on buildings in urban areas and they arrive on their breeding grounds nine months after midsummer.

A white stork foraging for frogs, toads, insects, lizards, rodents, snakes and earthworms over the meadow is a clear indication of a clean and healthy natural environment in the area. The condition of storks is an indicator of the quality of the environment and of people's attitude toward nature. That is why the increase in the stork population is a sure indicator that the environment is less polluted here than elsewhere. 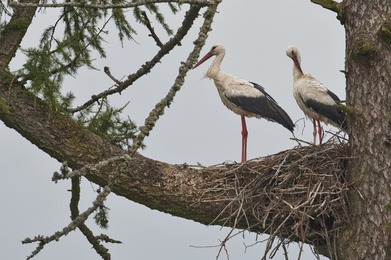 Storks in Latvia (by Manfred Anders)
Approximately 10,000 pairs of white storks nest in Latvia (in 1934 there were 7,000 pairs), that is why Latvia can be called the land of storks.The scientists call it a bird of prey, and say that it has settled in the territory of Latvia only during the past two hundred years.

Almost at every third farm house a pair can be found nesting. Often the stork is enticed to a house by hoisting a wheel on top of a pole to supply the foundation for a nest.

In some places storks live in huge colonies and walk en masse through neighbouring fields. Nesting colonies are characteristic of southern regions, but the northernmost colony in Europe is located in Latvia- near "STĀRĶA LIGZDA", in a lane by the Valmiera - Mazsalaca road.   There are more than 25 nests and this is also the largest colony of white storks in Latvia.  Here one can see up to three nests in one tree. White storks are not people shy, and they let themselves be observed and photographed.